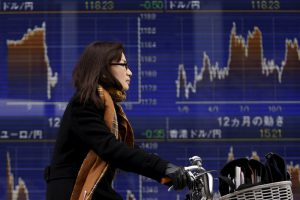 Stocks fell in Europe while U.S. equity-index futures fluctuated in the countdown to major central bank meetings and a deadline on fresh China tariffs. Treasuries and the dollar were steady.

The Stoxx Europe 600 Index opened lower for a second day as almost every industry sector traded in the red. Contracts for the main American gauges struggled for direction as investors await news on whether Washington will go ahead with a planned Dec. 15 tariff hike on imports from China. The picture was mixed in Asia, where a regional gauge declined overall in below average volumes while shares in South Korea and China bucked the retreat. Japan’s 10-year bond yield briefly touched zero for the first time since March.

Investors appear to be holding back on aggressive trading before a slew of significant events in the next few days, from Federal Reserve and European Central Bank policy meetings to a general election in Britain. The biggest focus arguably remains on whether the U.S. and China can avert a new round of protectionist duties.

Elsewhere, the Mexican peso strengthened on growing optimism that approval is close for USMCA, the trilateral trade accord to replace Nafta. Oil was little changed.

Here are some key events to watch this week: