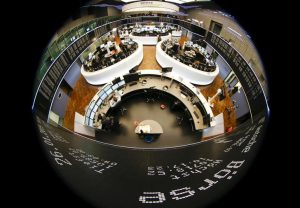 Asian shares made guarded gains on Monday as investors dared to hope for some progress in the endless Sino-U.S. trade dispute, while the outperformance of recent U.S. economic data gave the dollar a leg up on its peers.

On Saturday, U.S. national security adviser Robert O’Brien said an initial trade agreement with China is still possible by the end of the year, though he warned Washington would not turn a blind eye to what happens in Hong Kong. comments add to worries that a Chinese crackdown on anti-government protests in Hong Kong could further complicate the talks.

Over the weekend, pro-democracy candidates in Hong Kong romped to a landslide and symbolic majority in district council elections in the embattled city. are showing some signs of tiring of the steady drip feed of upbeat comments from U.S. officials and no signs of a final agreement looking likely,” said Robert Rennie, head of financial market strategy at Westpac.

“Key for markets will thus be whether the Dec. 15 tariffs covering approximately $156 billion of largely technology imports are postponed and whether a deal can be signed ahead of that date, with press suggesting that these tariffs will be delayed to give negotiators more time.”

In currency markets, the dollar had rallied on Friday when U.S. manufacturing surveys beat forecasts, just as European Union numbers disappointed. Economic data outperformed, highlighting again the resilience of the economy and that while global growth has slowed, it remains the least dirty t-shirt in the laundry basket,” said Tapas Strickland, a director of economics and markets at National Australia Bank.

“For the EU data, the important takeaway was the ongoing decline in the manufacturing sector is now spreading to the larger services sector, a worrying sign for the global economy.”

European Central Bank President Christine Lagarde on Friday called on euro zone governments to strengthen domestic demand after a global trade war brought a decade of export-driven growth to an abrupt end. Reserve Chair Jerome Powell speaks later on Monday and is expected to underline the steady outlook for rates given the better economic figures.

Europe Gains as States Look to Reopen Their Economies