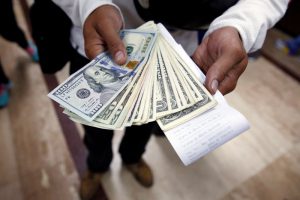 The U.S. dollar was trading near one-month lows on Wednesday after U.S. President Donald Trump warned a trade deal with China might not come until after the 2020 presidential election and threatened to escalate his trade war with other nations.

Trump’s statement Tuesday that he had “no deadline” for an agreement with China hurt sentiment as global trade frictions have already hit economic growth, with many economies struggling to find their footing.

On Monday, he said he would hit Brazil and Argentina with trade tariffs for “massive devaluation of their currencies”.

If there is no deal or substantial progress in talks before Dec. 15, tariffs on remaining Chinese imports, including cell phones, laptop computers and toys, will take effect, Ross said.

“Expectations for a U.S.-China trade deal are fading, and dollar/yen has broken its support levels, so the bias is tilted to the downside,” said Takuya Kanda, general manager of research at Gaitame.com Research Institute in Tokyo.

Market analysts said the dollar could only weaken substantially if U.S. economic data showed a sharp declaration and expectations of rate cuts grew sharply. Money market futures are pointing to a rate cut of one quarter point by next July.

The euro was little changed near one-and-a-half week highs against the dollar at 1.1085.

The biggest beneficiary of the slide in the dollar was the British pound, which climbed 0.5% to a fresh six-month high of 1.3059.